The prosecution said that Jeff had started a fire to destroy evidence that might show he had killed his parents.  Jeff said he saw Christopher set his mother’s body alight.  At the trial, the prosecution had a fire expert create “demonstrations” which were shown to the jury over the objections of Jeff’s legal team.  The demonstrations showed a small, slow moving fire that could have been easily put out.  These tests however, left out key factors that affect rate of growth and size of the fire.  This evidence made Jeff’s account look like a lie.

The Prosecution Case on Fire

On the basis of the experiments by the Crown’s expert witness shown to the court, the prosecution argued:

“there’s 10 or 15 seconds… there is time to do something… (Jeff) didn’t do a thing to try to stop that fire and that’s not, the Crown submits to you, what an innocent man, a man who had not killed his parents, would do in those circumstances.” (T1446.10)

To determine if there was time to do something, members of the group sought to understand what those circumstances were, and referred to the footage of the demonstrations.  What they found was concerning, and they learned that a number of key elements were missing from these tests:

The effect of these missing elements is profound in retarding the rate of fire growth in the first 10 to 15 seconds.  As such the jury were presented with misleading evidence about the truth of Jeff’s account.

To consider the effect of these variables on the rate of fire growth and the size of the fire in that first critical 10 to 15 seconds, Jeff NEEDS Justice re-created the fire tests undertaken by the prosecution’s expert and, next to this re-creation, performed another test that took into account the key missing elements.  These are conditions and experiments that can be readily reproduced by anyone with adequate safety training and equipment.

In this experiment, the pipe on the left is the control PVC pipe under the same conditions as those shown to the trial jury.  The right is filled with water at about 35°C and covered with the leg of a flannelette pyjama.
Approx. 400ml turps has been spread over the pipes in each case. 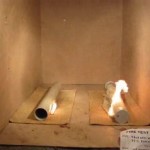 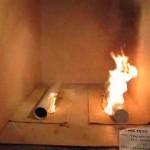 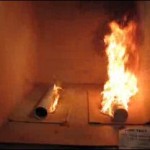 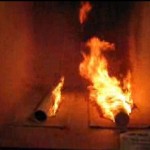